A delicious pastry treat, my homemade churros have that signature crunch on the outside with a nice chewy center and of course, the traditional cinnamon and sugar coating.

Churros are one of my favorite treats, especially when served warm with chocolate sauce. 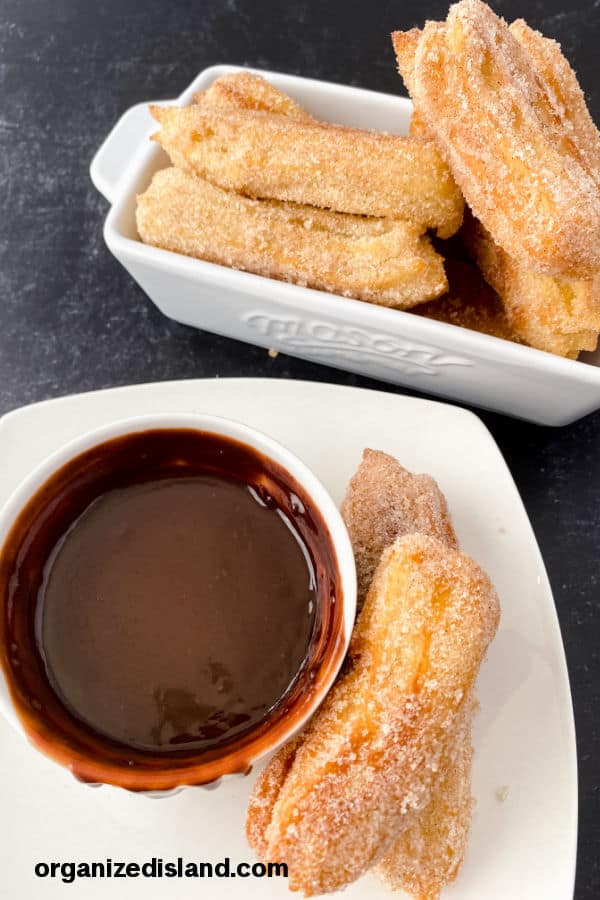 Homemade churros are not nearly as hard to make as you might think. A simple batter is fried and dusted in cinnamon and sugar. This recipe comes together very quickly and impresses whomever you need to feed.

If you don't keep unsalted butter in the house, that might be the one thing you should grab at the grocery store before attempting this recipe. Also, make sure you have real vanilla extract and ground cinnamon. 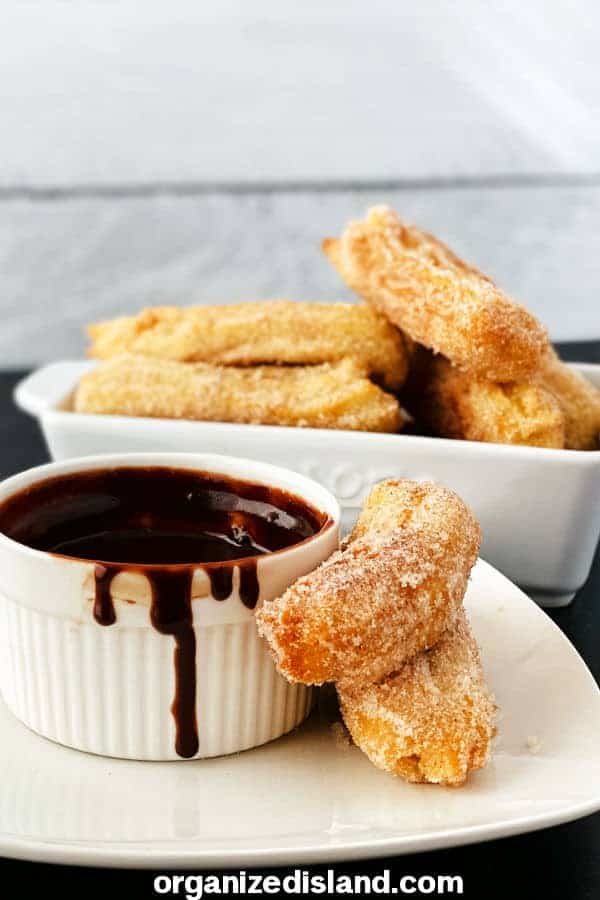 Most of the ingredients needed for this recipe are your typical pantry items.

For the Homemade Churros

Water. Just water. Nothing special about it.

Unsalted Butter. Make sure you get the unsalted variety!

Salt. Granulated salt like what is used in salt shakers.

Egg. I usually use a large or extra-large egg in recipes.

Vanilla Extract. Imitation vanilla may be used but will not taste the same.

Ingredients for the Cinnamon Sugar

Cinnamon. I love Saigon cinnamon, but you really can't go wrong with this fragrant spice.

Ingredients for the Chocolate Sauce

Heavy Cream. This will give the sauce body.

Milk Chocolate Chips. Using the milk chocolate variety adds a little more sweetness to this sauce over a traditional ganache.

Vanilla. A little more flavor will go a long way.

Equipment You Will Need

Stand Mixer with the whisk attachment

How to Make Homemade Churros

More complete instructions are included on the recipe card! 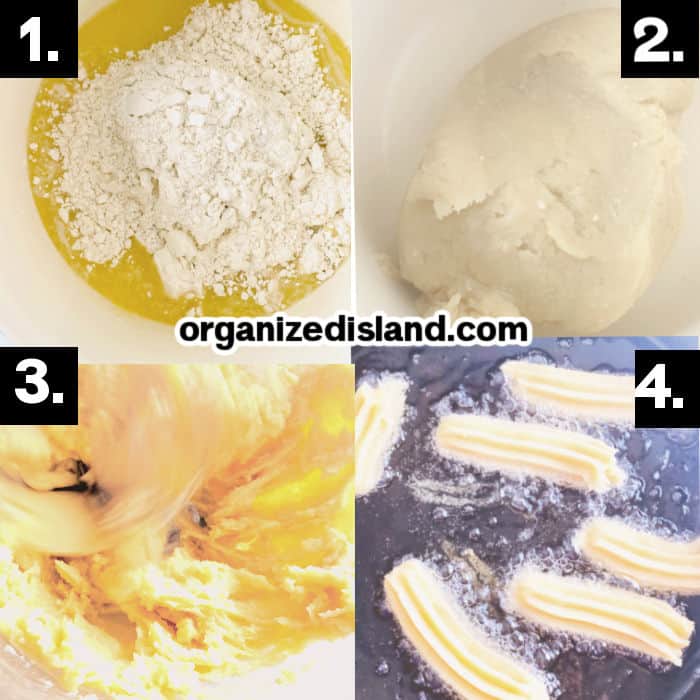 In a heavy-bottomed saucepan bring water, butter, sugar, and salt to a low boil just long enough to melt the butter.

Add in the flour to form a thick dough.

Let the dough cool for five minutes in a mixing bowl.

Add the egg and vanilla and mix until a loose dough forms. (This will resemble pate a choux.)

Preheat your vegetable oil in the skillet.

Prepare your piping bag by cutting off the end slightly, and dropping the tip down into it.

Pipe strips of dough directly into the hot oil. 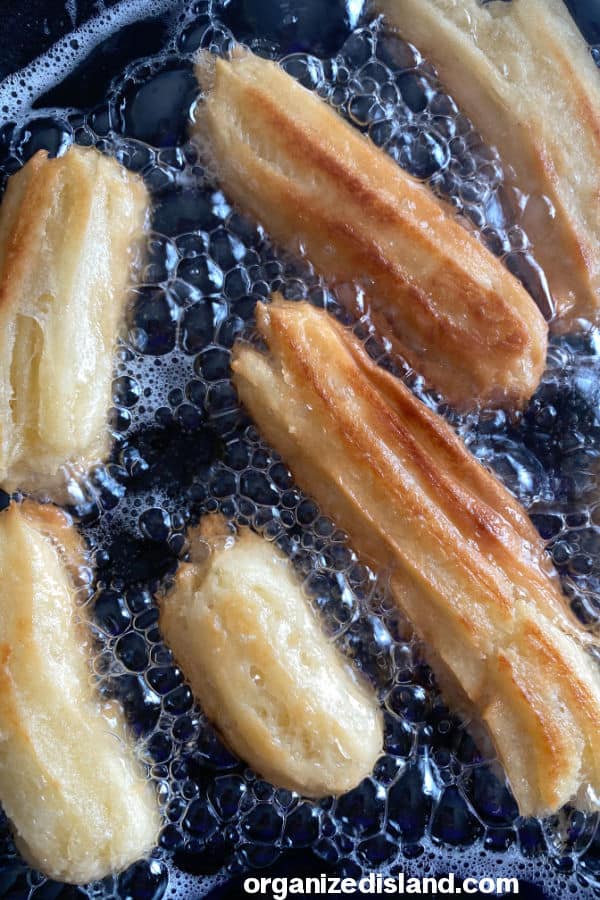 Fry on all sides about 3-5 mins, until golden brown.

Drain on paper towels to remove excess grease, and toss the hot homemade churros in the cinnamon-sugar mixture. 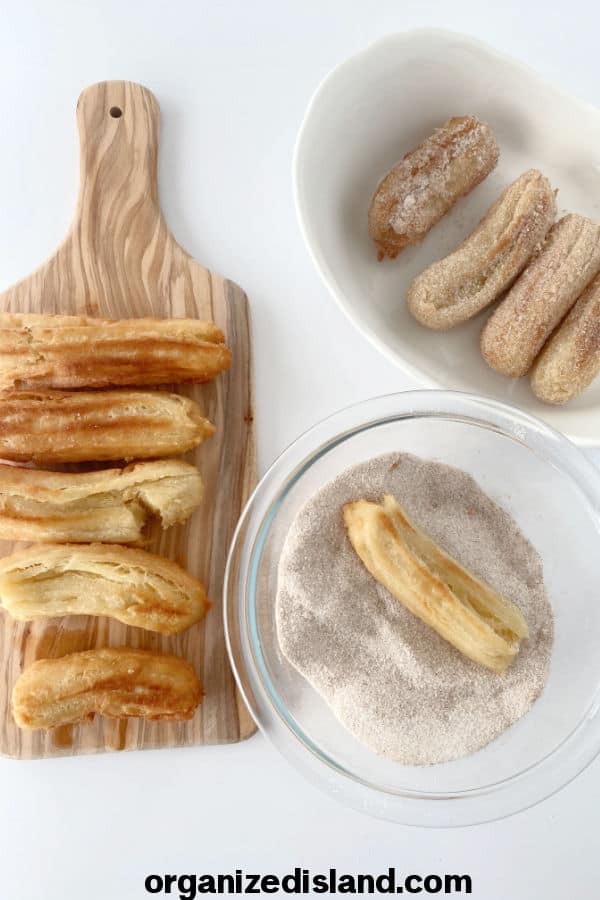 How to Make the Chocolate Sauce

Bring the heavy cream to a slight boil. Add in the chocolate and vanilla.

Remove from heat and stir until the chocolate has melted.

Pour into ramekins for individual dipping.

Using a well-made saucepan with a heavy bottom to cook the batter mixture will help it cook more evenly and prevent burning.

Preheating your vegetable oil in the skillet will result in a better churro and save time once you have the piping bag ready. I would add the oil to the skillet and move it directly onto the burner when you remove the batter mixture so it starts preheating. You can turn the heat down to low and then turn it up when you are getting everything close to ready.

Can I Use Half n Half for the Chocolate Sauce?

Since you are making a dessert, there really is no benefit to using less fat and the sauce won't have the same texture or thickness with this change in ingredients.

Can I Use Different Chocolate?

Honestly, this is a personal preference. Semi-sweet chocolate is more traditional and would work just fine. Bittersweet would not work well without some modifications. If you have a dark chocolate bar with at least some sugar, you could try it and see what you think.

Can I Store the Homemade Churros?

You can place the churros in airtight storage for a couple of days and reheat in a microwave to serve. However, they will get chewier in storage and do not keep as well as other desserts. 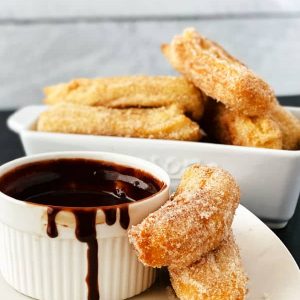 Don't forget to bookmark this recipe. 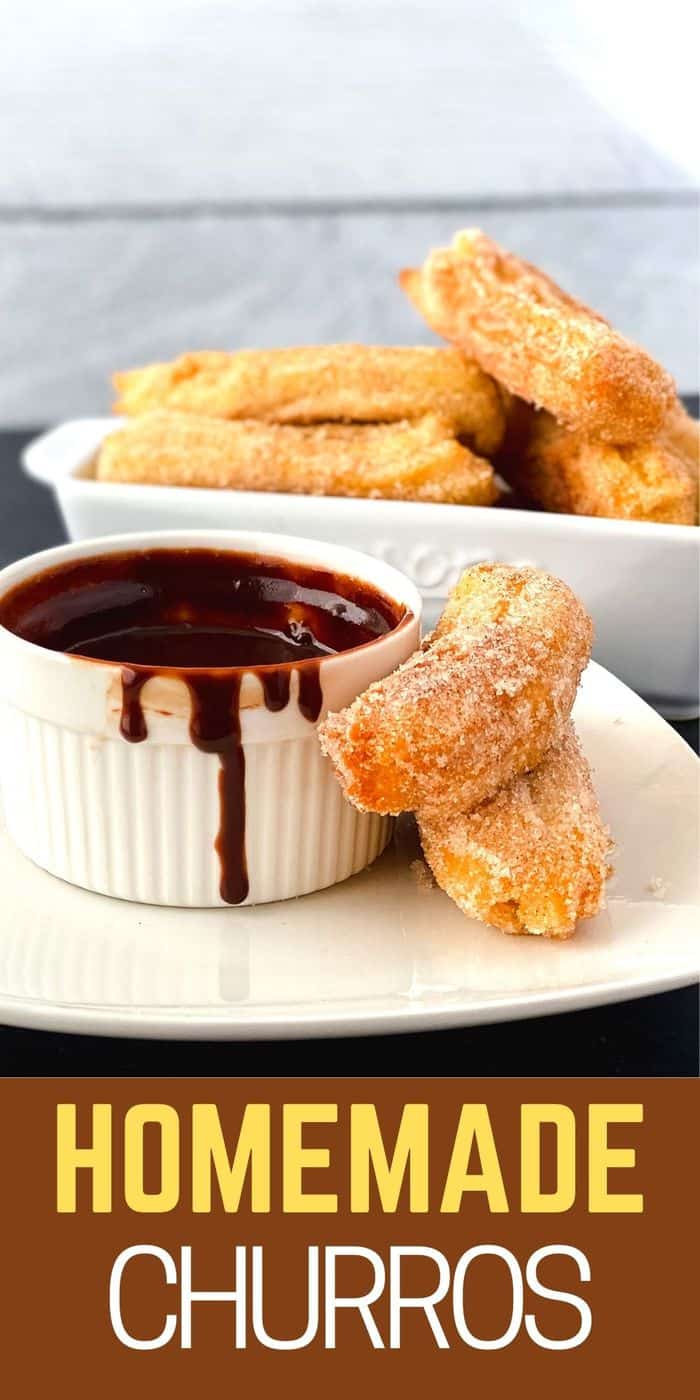 Nutella Mug Cakes. An easy and satisfying individual dessert when you don't have many mouths to feed.

Streusel Coffee Cake. A great way to start or end the day.

No Bake Oreo Cheesecake - A delicious dessert any time of year and so EASY to make!

If you are not yet subscribing to my CELEBRATE THE SEASON newsletter, you can subscribe here. I share a few things that I don’t share here and I email you only once a week. I know how valuable your time is and respect that tremendously!

If you try this recipe or any other recipe on Organized Island, please don’t forget to rate the recipe and let me know where you found it in the comments below, I love hearing from you! To see what I am up to, check out my stories on Instagram and let me know you are following. It would bring me much joy!

Want to streamline your weekly meals? Check out my Beginner's Guide to Meal Planning book on Amazon.