Why This Recipe Rocks

This easy cupcakes recipe is a fun way to incorporate your favorite cereals into a dessert.

This cupcake recipe and method can be used to make other cereal flavored cupcakes.

These are made with a cake mix to save you time.

These are so tasty too!

Cinnamon cupcakes are so easy to make.

Step Four: Once cupcakes have cooled, frost with frosting, drizzle caramel with a spoon.

Hint: For best results, use room temperature butter when making the frosting.

Here are a few substitutions for this recipe

For this recipe you will need the following:

Store cupcakes in an airtight container in the refrigerator. 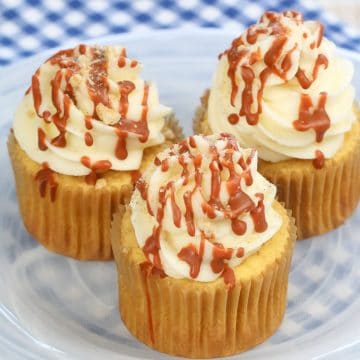 *If you can’t find the cinnamon chips, you can skip this step For Best Results - use a tea spoon to drizzle caramel sauce on cupcakes.

If you are not yet subscribing to my CELEBRATE THE SEASON newsletter, you can subscribe here. I share easy recipes for the season and a few things that I don’t share here. I email you only once a week as I know how valuable your time is and respect that tremendously!