When I was about 10 years old, I had at least 200 photos of a certain celebrity on the walls of my room. It was my first celebrity crush. No it wasn't Bobby Sherman, Donny Osmond or even Davy Jones. I watched David Cassidy on The Partridge family religiously, but he was a bit too old for me.

The year was 1973. I was in the 5th grade and just getting into music (music videos and MTV had not been invented yet) and I loved watching American Bandstand. One summer day I was watching the show and a band I had never seen before was on it. The song that caught my attention was Heartbeat, It's a Love Beat.

But it wasn't just the song or his very cool pastel suit.  His dark brown eyes and that sweet smile were so captivating (sigh), and he was just a few years older than me, so he was perfect! 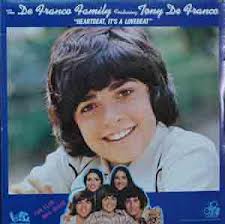 There he was, Tony De Franco of the DeFranco Family.  He always sung with his two sisters and two brothers.  With the help of Tiger Beat and 16 magazines, I followed him and his family. I knew his favorite color, past times and even his favorite restaurant. (Which was said to be the Warehouse Restaurant in Marina del Rey and yes I went there on more than one occasion hoping to run into him).

I can only imagine if there were Facebook and Twitter back then. Probably a good thing there wasn't.

Each year, I begged my mom to take me to Knott's Berry Farm because that's where his family would perform. Those were fun summers.

Soon afterwords, I moved on to Rick Springfield and John Travolta as my next crushes. Then I started high school and that was the end of celebrity crushes.

I found out in writing this post that there is a Facebook Fan page for the DeFranco family.  It has about a 1000 likes on it and today, I am liking it and added it to my interest list on Facebook. You never know where I might run into him. I wonder if he is on Twitter?

Who was your first celebrity crush?

This is part of a GenFab Blog hop. We are discussing celebrity crushes.