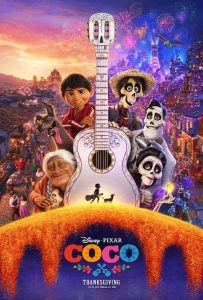 Disney and Pixar have collaborated on so many great animated films. Toy Story, The Incredibles and Frozen are all unforgettable movies that have made us fall in love with animated characters. I have no doubt that COCO will do the same. The trailer looks so cute and I love that fall brings not only pumpkins and colorful leaves, but some fabulous movie offerings. Check out the trailer and free activity sheets below. COCO opens in theaters everywhere on November 22nd!

Despite his family’s baffling generations-old ban on music, Miguel (voice of newcomer Anthony Gonzalez) dreams of becoming an accomplished musician like his idol, Ernesto de la Cruz (voice of Benjamin Bratt). Desperate to prove his talent, Miguel finds himself in the stunning and colorful Land of the Dead following a mysterious chain of events. Along the way, he meets charming trickster Hector (voice of Gael García Bernal), and together, they set off on an extraordinary journey to unlock the real story behind Miguel's family history.

Also coming from Disney is the live-action film adaptation of the animation film, Aladdin.
Disney recently announced that the “Aladdin” cast will include: Two-time Oscar® nominee Will Smith (“Ali,” “Men in Black”) as the Genie who has the power to grant three wishes to whoever possesses his magic lamp; Mena Massoud (Amazon’s “Jack Ryan”) as Aladdin, the hapless but lovable street rat who is smitten with the Sultan’s daughter; Naomi Scott (“Power Rangers”) as Princess Jasmine, the Sultan’s beautiful daughter who wants to have a say in how she lives her life; Marwan Kenzari (“Murder on the Orient Express”) as Jafar, an evil sorcerer who devises a nefarious plot to unseat the Sultan and rule Agrabah himself; Navid Negahban (“Homeland”) as the Sultan, the ruler of Agrabah who is eager to find a proper husband for his daughter, Jasmine; Nasim Pedrad (“Saturday Night Live”) as Dalia,. ds.

What movie are you looking forward to most this season?